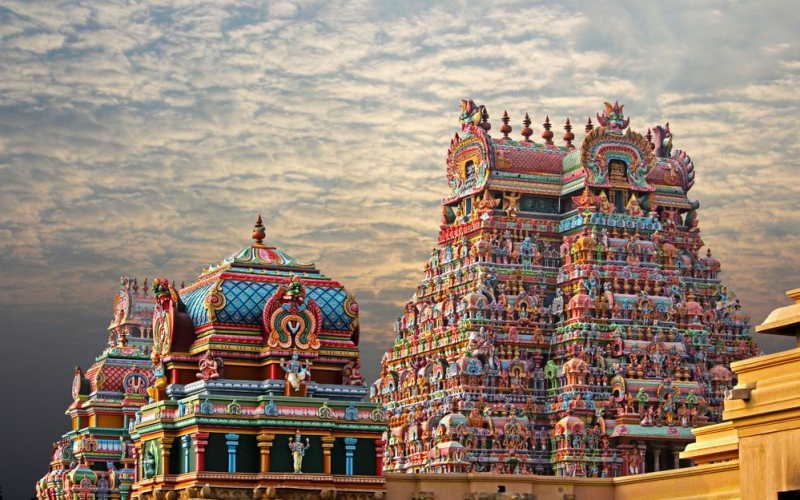 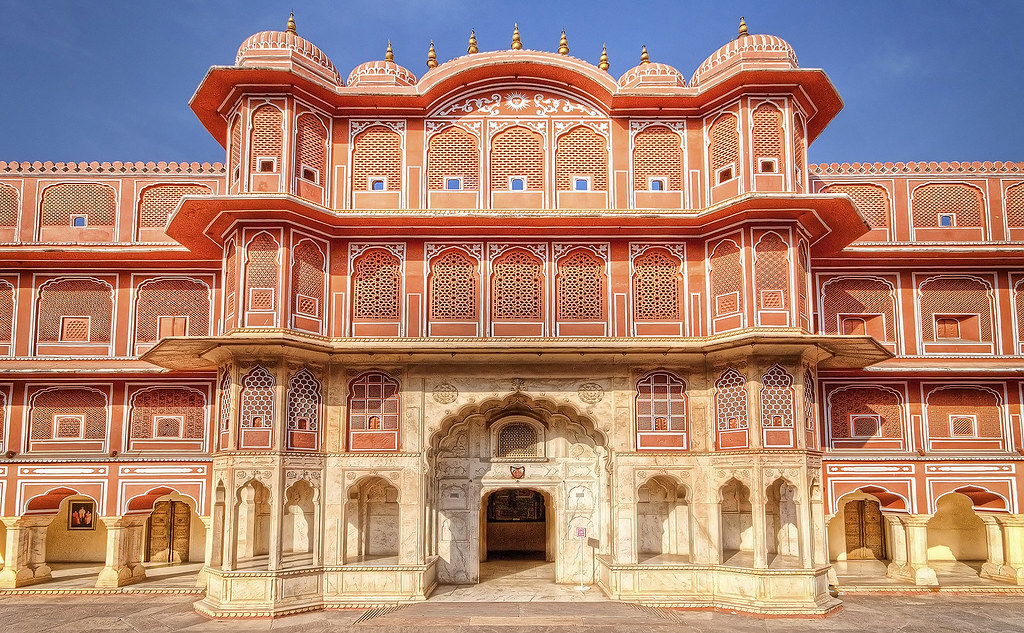 The pink city of Jaipur is the India of a million tourist photos. The sunlit forts and palaces, the elephants and camels in rush-hour traffic, the dust, big moustaches and even bigger turbans, the hot pink sarees and rugged landscape of Rajasthan, everything is there, all the sights and sounds from a holiday brochure.

More important for Vaishnavas is the city’s role of offering protection to devotees of Krishna as they fled from historical aggression. Finding Krishna in Jaipur is therefore an extra and spiritually rewarding part of any visit.
Jaipur has had a long connection with Bengal and the devotees of Krishna. Back in 1570, King Man Singh was a follower of one of the Six Goswamis of Vrindavan, Raghunatha Bhatta. He sent thousands of builders and tons of red sandstone to create a temple for Rupa Goswami’s Govinda deity. It took five years to build and was the best of its kind in northern India. Later, in 1597 he sent his sons with a large Mughal force to help the ruler of Bengal, King Laksmi Narayana, chase away Isha Khan, who had attacked him. Man Singh later married the Bengali king’s daughter.

But only one hundred years after the temple was built, the fanatical ruler of India, Emperor Aurangzeb, sent his soldiers from Delhi to demolish the Govinda temple in Vrindavan. The deities were removed before the soldiers arrived and, after many years of being worshipped in several places, came to be installed in Jaipur.

The city was built by King Sawai Jai Singh II in 1727 and named after him. He ruled from 1699 to 1743. Previous to Jaipur, the kings had all been up in the hills in palatial forts like the one at nearby Amber. This new city was built on a flat plain and was designed for easy access and for trade, being perfectly situated between Bombay and Delhi. The king had the original city painted with a wash of pink – a popular colour in Rajasthan. Since those days the population has increased and the city has expanded.

The palace has a large garden where, in addition to the many monkeys and peacocks, the royal family used to keep crocodiles in the ponds. King Jai Singh II was a strict follower of Vedic building codes – his two-mile square city has nine gates and the streets are laid out in a grid system – so he knew about the codes for constructing temples. But the need of the hour was great and so Govinda was installed in a large garden pavilion with open sides. Now it is difficult to imagine Govinda anywhere else. The crowds that come to see Radha Govinda are large, boisterous and noisy, and full of devotion. There is much singing and dancing, circling of the altar, and the mood is one of joy. 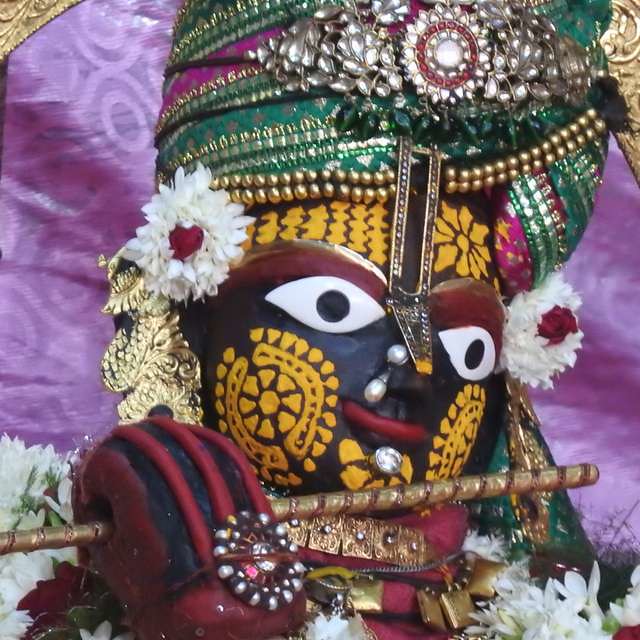 Close-up of Govinda, the Lord of Jaipur

In the early part of Govindaji’s residence at the palace, the priests were from the Ramanandi sect. They removed Radharani from the side of Govinda and placed the deity in a back room, arguing that there was no scriptural evidence for that mode of worship. The young Baladeva Vidyabhusana countered that Rupa Goswami, the original installer of the Radha-Govinda murtis had been the most prominent follower of the great Chaitanya Mahaprabhu, and that for this reason the original worship was valid. But the Ramanandi priests insisted that if the sampradaya was authentic it must have a commentary on the Vedanta Sutra, otherwise it could not claim to be authorised. When Baladeva Vidyabhusana claimed that the Srimad Bhagavatam was the natural commentary on the Vedanta Sutra, the Ramanandis refused to accept this claim. This debate took place in the nearby ashram of Galta. 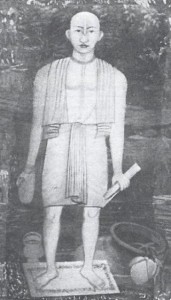 Baladeva turned to Visvanatha Chakravarti Thakura who was by then over ninety years old and many miles away in Vrindavan. He charged the young disciple with the task of writing a commentary on the Vedanta Sutra. Baladeva prayed to Govinda for the blessing to achieve this monumental task of scholarship. Completing it in a brief time he named it the Govinda Bhasya or ‘Govinda’s Commentary.’ Perhaps because of this intellectual and devotional triumph, the priests I spoke to when I visited in 2017 were all from the Gaudiya Sampradaya, originating in the Navadwipa area of what is now West Bengal.

When the then king of Jaipur, Maharaja Sawai Madho Singh ll, (ruled 1880-1922) travelled all the way from India by ship to attend the coronation ceremony of Edward Vll in London, in August 1902, he took with him not only vast silver flagons of Ganges water, but the deity of Govindaji Himself. Thus Lord Krishna arrived by ship to London at the very beginning of the 20th century. 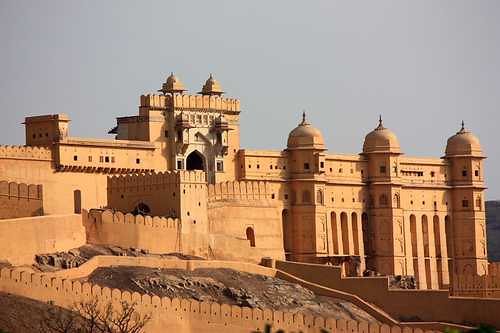 The Amber Fort, home to the Kachawaha kings before the building of Jaipur in 1727

The village of Amber is at the foot of the hill on which stands the Amber fort, beloved of kings and tourists. There is a very old temple of Nrsimhadeva from the 14th century built by King Narasingh Dev some time between 1388 and 1428. When we went there, it took us a while to find it, and there was quite a bit of asking for directions, finger-pointing and broken Hindi, dead-end streets and climbing of stairs but we found Him eventually. 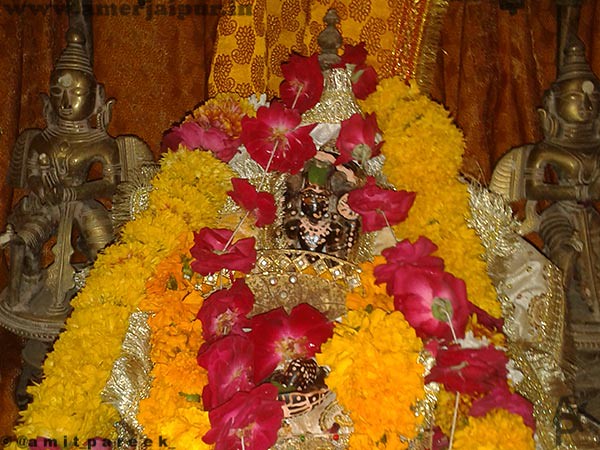 As well as these old and beautiful deities we also visited the Radha-Krishna of Lokanatha Das Goswami, the spiritual master of Narottama das Thakur. They are named Radha-Vinode  or locally ‘Vinodilal,’ and are also in a relatively secluded place off a busy shopping street. If you find the Tripoliya Gate then walk down the street opposite, you’ll find the doorway about 50 yards up. 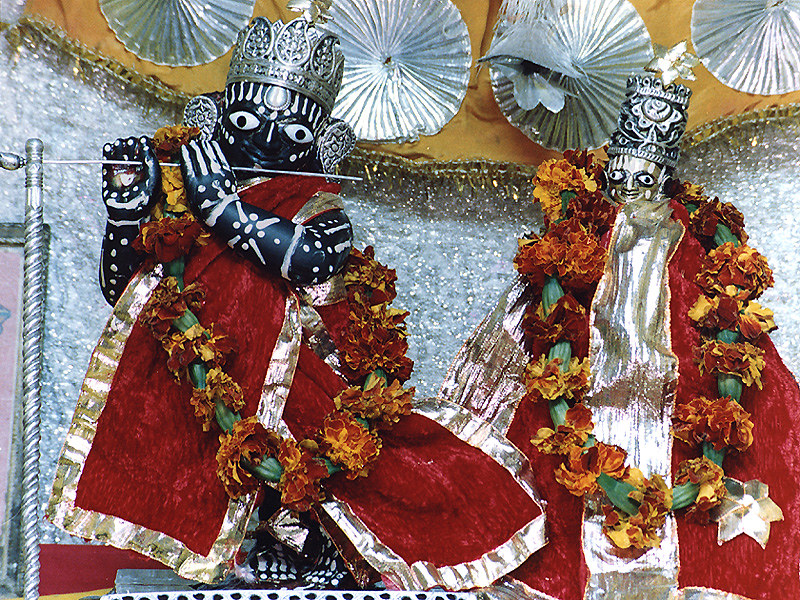 Radha-Gopinatha are the beautiful deities of Madhupandit and are very popular, being worshipped by many adoring devotees several times daily with joyfully played gongs and cymbals. If you go there you’ll be charmed, for sure. You’ll also get to see the original coat and hat of Madhu Pandit, made entirely of Tulasi beads. 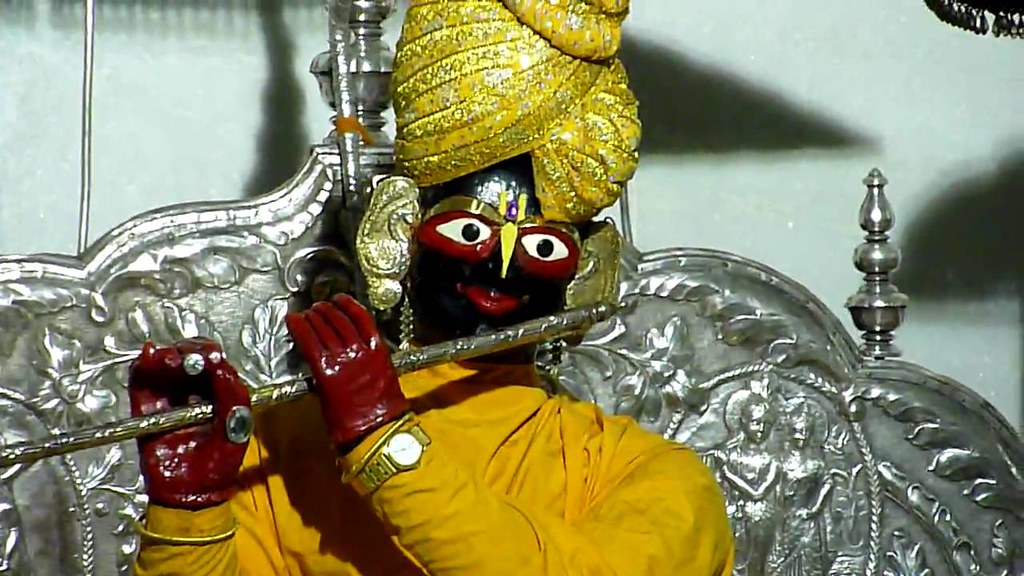 Jaipur is quite well served by pure vegetarian restaurants where you can have food that is onion and garlic free. BMB and LMB are two we tried and were happy with. You just give any rickshaw driver these acronyms and they’ll know where you mean. In BMB you can order a ‘Vaishnava Thali’ – an all-you-can-eat special with refills of all the dishes including hot chapatis. 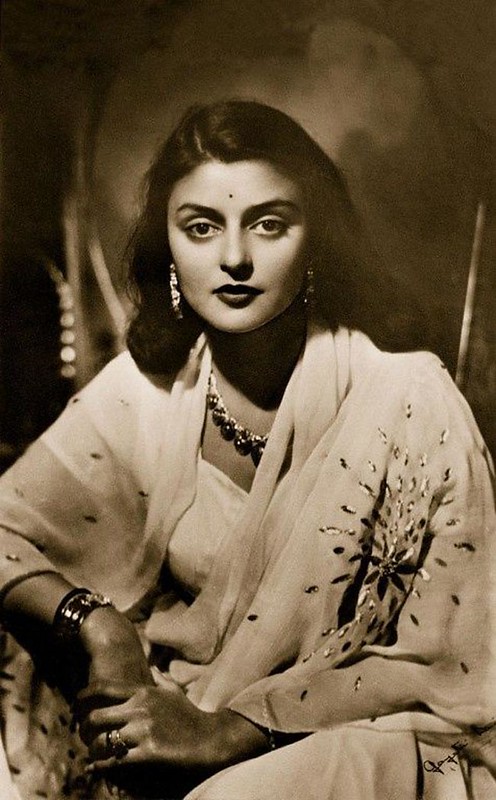 The founder-acarya of the ISKCON, Srila Prabhupada, also liked Jaipur, and the locals gave him a warm welcome. Queen Gayatri Devi, a fellow Bengali, hosted him and his young western disciples in 1972, and also presented him with beautiful black and white marble deities of Krishna and Radha who now stand in Brooklyn, New York. 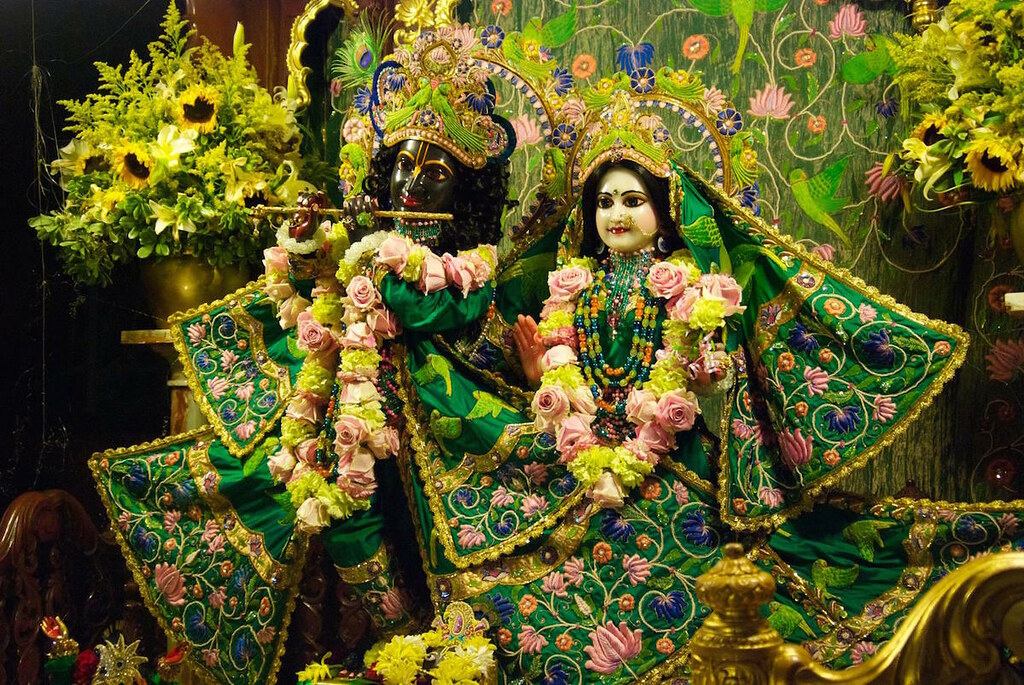 Some of Jaipur’s prominent citizens had devised a plan to share expenses and responsibilities in arranging a pandal program.

At Srila Prabhupada’s request, devotees from Delhi and other Indian centers came to Jaipur to join him. Prabhupada took a small room within the Govindaji temple compound, and his disciples moved into a nearby house. Throughout the week-long festival large crowds continued to come for Prabhupada’s morning and evening lectures. Prabhupada would chant prayers from Brahma-samhita and then lecture in Hindi.

Not only did the citizens of Jaipur honor Prabhupada, but they honored his disciples also. Here, more than in most other Indian cities, the devotees were treated not as foreigners or outsiders but as sadhus. “This whole city is made of devotees of Radha-Govindaji,” Prabhupada commented. The police chief, who visited often, was cordial and respectful.

As Srila Prabhupada and his disciples went from place to place in Jaipur during the day, policemen would salute them, halting traffic to let them pass. People invited Srila Prabhupada to their homes, and they treated him like a king.

For accommodation we stayed at ‘The General’s Retreat’ which is large residential house now turned into an 11-room B&B. The grand-daughters of the famed General Umrao Singh run a clean and well-ordered establishment, with a large garden and generous breakfasts. It’s on one of the main roads into the city – Sardar Patel Road in the Chomu District – and close to a railway line, so you won’t be spared any of India’s transport sounds during day or night. But if you get up earlier in the morning and are active during the day, when the sun goes down you won’t find it difficult to fall asleep. Ask for one of the upstairs rooms so that the domestic noises won’t disturb you.