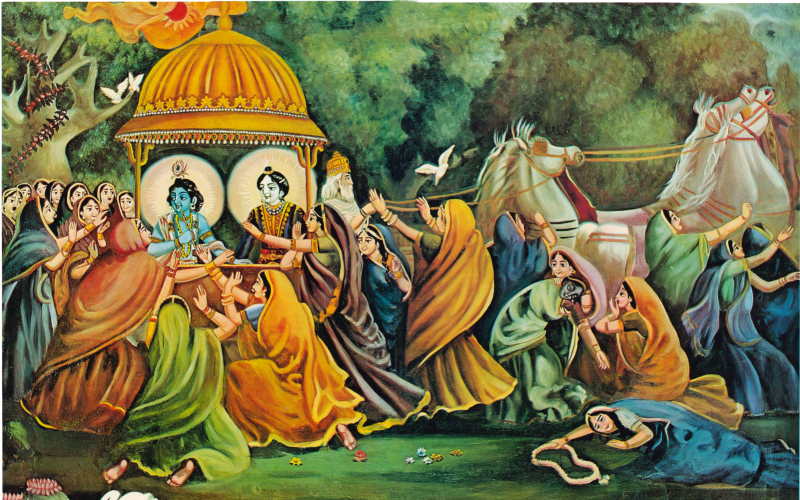 The first four years of my life as a devotee of Krishna were spent in a 1974 Ford Transit like this one.

Sometimes people ask me: “What was the temple like when you first joined?” I reply that I lived for only three days at the Bhaktivedanta Manor. After a brief introduction to Krishna consciousness in a large country house I was invited to travel around the country selling the Bhagavad-gita. In a Ford Transit van.

I travelled for four years in that van. It was my trusty vehicle, my home and my temple. I loved the life.

There were usually about four of us travelling together. We would load up the van on a Sunday morning with supplies of books and records to sell, and depart in the afternoon after the Sunday Feast . All week long, come rain or shine, we would be out on a high street somewhere introducing people to our spiritual masters books.

The van was a little cramped for sleeping, and a bit cold in the winter because there was no heating whatsoever. On a very cold night the condensation from four people breathing would freeze on the metal roof and we’d wake up to find small icicles hanging above us.

We would wake up at 3.30 in the morning, roll up our sleeping bags and jump outside the van all in one orchestrated movement. We’d then run to have our daily bath in a river, a lake, or the sea. The shock of the icy water at that time of the day would instantly focus our minds and, once dressed, absorption in meditation would come easily.

Because of our overnight locations – always in a country spot near fresh running water – my first few years of chanting the maha-mantra were all in picturesque countryside. Forests, mountains, moors and pasture, or beaches and fenland. Chanting the names of God with the inspiration of His handiwork all around you was a good combination. I was up before the birds, and then communed with them as they began their dawn chorus.
Kirtan at sunrise is an experience that everyone should have. And of course, the Srimad Bhagavatam class, that best of all books; God Himself in literary form; our mornings would be adventures of spiritual discovery.
Our Pancha Tattva altar, on the dashboard, naturally, was the most beautiful. Even the temples in the city didn’t always have the flowers that we had. And each day brought a new opportunity for us to decorate our altar in different ways and colours than the day before.

And the cooking was good too. Fresh vegetables. Sometimes they were picked straight from a field or given to us the night before by kindly locals who liked the idea of monks passing through the district. All food tastes better when you cook it yourself, when its cooked in the open air, and after its been offered to Lord Sri Krishna. And we only ate blessed food that fitted all those categories.

Every day we were in a different town; sometimes in Wales or Scotland, and quite often we’d load up the van so we couldn’t fit anything more in and catch the ferry from Liverpool over to Ireland. Our first few days in Ireland would involve sleeping with heads one inch from the ceiling! Our inspiration was that somewhere in the world Srila Prabhupada was translating the Bhagavatam, and we were helping him to distribute the books he’d translated. Not only that, but we also knew that he would be given reports of our book sales and make satisfied remarks on our endeavours. The thought that we were pleasing him kept us going through all weathers. He had already written to express his pleasure at our service and we wanted to make him even more pleased. From time to time he would come to England and we got the chance to assemble before him and to hear from him how important it was to distribute his books.

Not everyone shared our missionary vision of course. Four young men travelling around the country, getting up in the middle of the night, walking around in sheets talking to themselves sometimes frightened the life out of passers-by. To the police driving by in the early hours we were surely on drugs, and the van would occasionally be turned inside out by the police looking for the elusive chemicals that would make these young men act like this. And for us to have shaven heads in the long-haired seventies was, in itself, highly suspicious.

To the British Army in Northern Ireland we were terrorists, and many is the time that we were woken up in the early hours with a spotlight shining through the windscreen and seven or eight armed soldiers all pointing their guns at us.

On Sundays we would take time off to do our laundry and some extra reading. Perhaps we would cook up a feast and invite some people we’d met in the local town. Our van became our preaching centre. Occasionally we’d meet up with another travelling party and then two vans would reverse towards each other so that their open back doors met, creating a larger kitchen space.

Coming back to the temple was always joyful. Because of the intensity of our service during the week, we looked at the altar of Radha and Krishna and we knew they were pleased with our service. Saturday night kirtans through the West End of London with up to one hundred devotees would make us almost burst with happiness.

Whenever I see an old Ford Transit these days, or even just hear the name, I immediately smile and remember my first few years of travelling sankirtan, the years when I experienced ‘Vaikuntha on Wheels.’